It is you phone middle range It is Worth’s study, aúna nails capacity It is sorprendent It is with a reduced price. What the world foremost search, what ALL want, therein lies its success. Features a metal unibody chassis, about edges round and a fine picture frames for follow the current trend that going encaminada to screens that ocupen foremost the front terminal. AND also be sum to the year’s trend, the eyebrow or notch aglutina the front camera and sensors turn.

His dimensions 149.3X71.7×8.8mm and its scarce weight, just 178 grams, make it very manageable and not feel you have on hand a device too big. Is available in black, blue and gold. The Screen IPS CRYSTAL rounded 2.5D measures 5.84 inch single S and tally with 432 density pixels by inch single plus the effective protection from Corning Gorilla Glass. Podrás enjoy the best content sharper shape and defined as possible.

Between the sensors found foremost what calls any user medium in a phone from this range: fingerprint sensor Fingerprint in side back, accelerometer, compass, gyroscope, light sensor, PROXIMITY SENSOR and infrared. Supports ALL the Browsers: GPS, A-GPS, GLONASS Beidou and works with Bluetooth 4.2. Features Jack headphones and with FM radio via software, well as with a micro USB port for loaded. 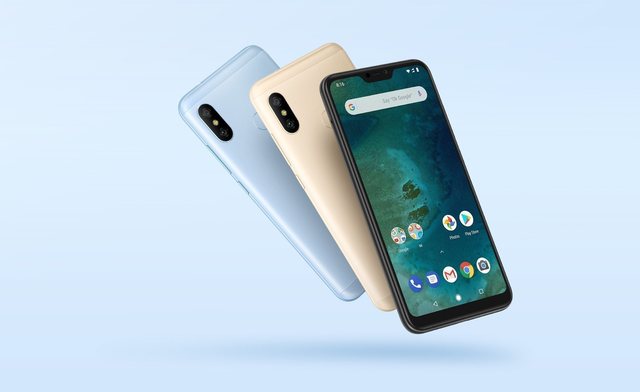 Xiaomi has deposited the fate this phone in one’s processor low consumption, scope long and excellent performance, the Qualcomm Snapdragon 625 eight-core works to a maximum frequency 2.0 GHz and is checked that no task be le resists. The part runs a charge card Adreno 506 graphics.

The My A2 Lite has 3 hard GB and 4GB’s storage RAM. Las versions that are available from this phone have 32 hard GB and 64 hard GB internal storage’s that are expandable up 256gb via micro SD card. Likewise, it is powered by a 4.000 mAh battery which you will give good quantity for you hold 2-3 days one use medium, if bets by Xiaomi know the Battery No Te fallará.

The tailgate camera has a double sensor, the main Sony has 12.0 MP and a Aperture f/2.2 that behaving properly under light dim, the secondary has 5.0 MP and the same resolution than the front camera that also has 5.0 megapixel. This My A2 Lite also features video recording in 4K for that disfrutes doing the best videos concert, birthday, adventures sports and travel by the world.

More search Swift than a ray with Android One

If by something triunfó the My A1 was by Lo new your software, the My A2 and My A2 Lite follow the same premise: Android pure and successfully secured. Don ‘T carry no extra layer promises a huge speed and fluency to manejarse’s time with the smartphone, an intuitive interface, full possibilities and fast as a ray.

Q: What warranty I have?

A: Todos our official télefonos have two years warranty in Spain, It is saying, it is the same télefono that pued It is purchased in a tent’s official offline.

Q: Which version has the télefono? It is imported version Spanish or version?

A: It is the global version Spanish, thing which can seek out by your IMEI in the official website Xiaomi, to ensure that Im not It is the version by Tada, but with official warranty Spanish over two years.

A: We Send from Spain, and we promise that your order arrive 72 hours

There are no reviews yet.